It’s a big weekend for WWE, as they try to tell us it is any PPV weekend. But this time round it’s actually kind of true, and Money In The Bank is only a little bit of the reason. No, this weekend is really TakeOver weekend, as NXT return to Chicago for the second year in a row. And with that comes a TakeOver Spotlight as always. So what match have I gone for this time?

Is it the match that could steal the weekend in Ricochet v Velveteen Dream? Is it what will presumably be the culmination of a year long classic rivalry between Johnny Gargano and Tommaso Ciampa? Well, no.

Instead I’ve gone for Shayna Baszler’s first TakeOver defence of the NXT Women’s Championship against Nikki Cross. Because on paper, I think this is one of the most intriguing title matches in a long time.

Since debuting on WWE programming in the Mae Young Classic last year, Baszler has been presented as a star. Personally I’ve always felt a little underwhelmed by her in-ring work, but she has the character absolutely on point, and that is a huge advantage over other women on the roster who are in the opposite situation. That gives her an obvious star power. 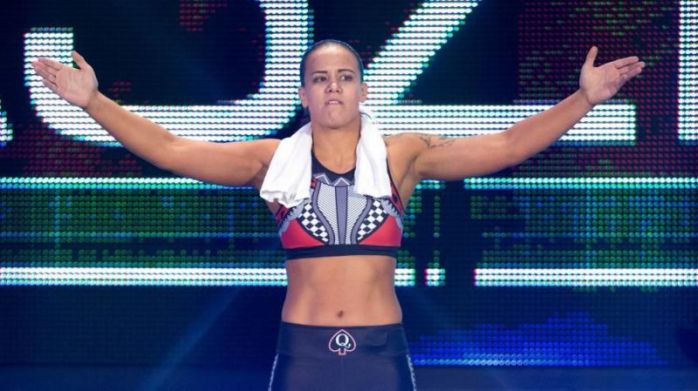 And that meant she was someone worth investing in in a big way, and quickly. Her loss in the final of the Mae Young Classic I believe is one of only two televised defeats under WWE’s umbrella, and when she arrived in NXT she was immediately pushed to the top. She received her first title shot at TakeOver: Philadelphia in January this year, exactly a month after her NXT TV debut.

But on her next opportunity on Wrestlemania weekend, she would successfully capture the NXT Women’s Championship. Ever since then, she has set about establishing her dominance over the rest of the division – not only in the ring but backstage in the locker room. She has left nobody in any doubt that she runs the division, that she is number one, and that if anybody has a problem with that on their own head be it.

Just take her rivalry with Dakota Kai. Kai was one of the first victims of Baszler’s run, losing a match via referee stoppage back in January. So when Ember Moon left to go to the main roster, Baszler tried to make an example of Kai once again. Memories fresh of the last time they stepped into the ring, Kai spent a few weeks cowering at the mere presence of Baszler.

Eventually Kai would snap back to reality and stand up for herself, but the entire point of the storyline was to put over how intimidating Baszler was. That is, until Nikki Cross got involved.

Sanity’s Scottish Superstar didn’t only show no fear of the Queen of Spades, she laughed in the face of adversity. It’s been well established in the last 18 months as part of Sanity that Cross is psychotic, so it perhaps shouldn’t have come as much of a surprise that Cross wasn’t as intimidated by Baszler as every other woman on the roster. But what was a bit of a surprise was how Baszler reacted.

That’s been the key to building this match. That’s the reason I said this is one of the more intriguing title matches in recent times on paper. Because Cross hasn’t just been the first person to show no fear of Shayna Baszler, she’s the first person to make Shayna doubt herself at all.

Basically Baszler has been intimidating results out of people. She gets in their heads. It’s all been mind-games, people like Dakota Kai have lost the match before they ever set foot in the ring. But Cross has gone so far the other way, that Baszler is the one uncertain going into TakeOver. She doesn’t know what to make of Cross, she is completely baffled by the Scot. So she has no idea how to get inside Cross’ mind, if that’s even possible, and that has gotten into Baszler’s.

It’s a really interesting pairing, and one that was the only option for Cross after the rest of Sanity left the yellow brand. My only issue with it is that I think it’s come one TakeOver too soon. Baszler really has only just been established as the dominant champion, and that makes it really unlikely that she’s going to lose the title this quickly. If it had been in a couple of months’ time at Summerslam, I think the result would be in far more doubt.

But then I have to ask the question, who else could have been in this spot? Candice LeRae has been rightly involved in the Gargano vs Ciampa build up, so that rules her out. Bianca Belair looks like she is being groomed to take the title down the line, but this would have been too soon. Kairi Sane would have worked well, but she was doing her own thing with Lacey Evans.

The best option would actually have been Dakota Kai, but they rushed through that story to get to Cross. Imagine the reaction if it was a TakeOver crowd that Kai started fighting back against Baszler in front of? They would have been so behind her, and it would have made Baszler all the bigger heel to shut her comeback down on that kind of stage.

But having said that, there are good story options coming out of Baszler vs Cross. Baszler overcoming this challenge with the win and her title reign intact should lead to an even more cocky champion. She should be all the more confident that if she can get past the challenge of someone who made her doubt herself, then nobody else is going to come close to touching her.

As for Cross, as I said, I feel like they rushed through the Dakota Kai story to get to this match up. Why? The only thing I can think of, and I don’t even think it’s all that likely, is that the writing team have been waiting on pulling the trigger on Sanity on SmackDown until Cross joins them. A loss would free her up to do just that.

Usually I round these articles off by saying something like it’ll be a great match, regardless of the storyline that has gone before it, but this time I think it’s a little different. This match may not be a technical classic, but it’s going to be all about the storytelling. It may be better rating this as an angle more than a match, and on that front at the very least I think it will deliver big.