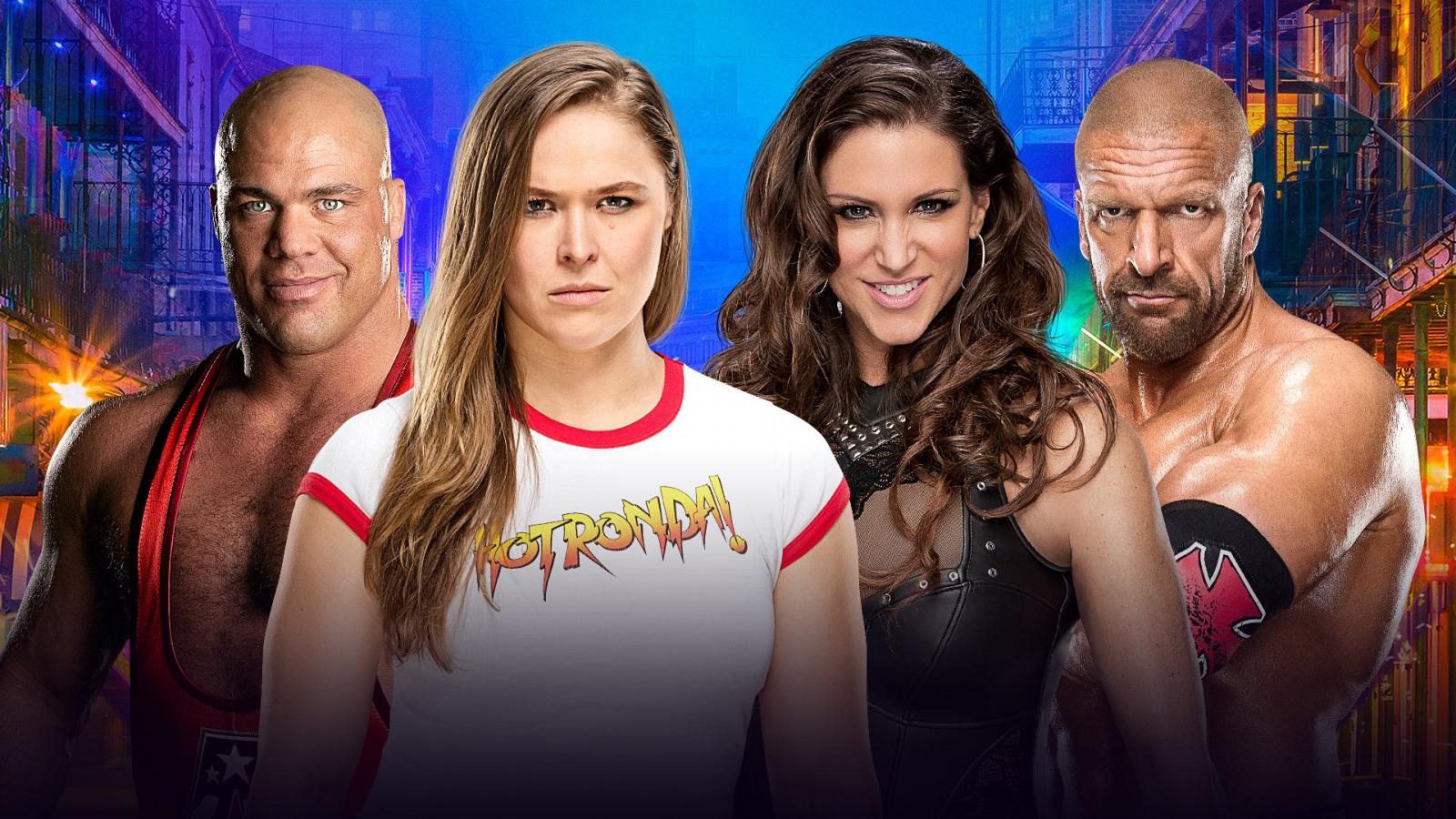 History was made at the Royal Rumble this year. Has anyone ever told you that? We were treated to the first ever Women’s Royal Rumble Match, which was really fun. But that was overshadowed by what followed before the show went off the air – Ronda Rousey debuted.

So if she brings that to WWE, she could be a game changer. For all the talk about a women’s revolution, it could be Rousey that really makes Vince push women to the top of the company.

It was announced after her debut that she signed a multi-year, full time deal with WWE. I’d guess that means she appears about as regularly as Brock Lesnar has over the last few years, and spends the rest of her time training at the Performance Centre. On screen Rousey signed her WWE contract at Elimination Chamber, and she makes her in-ring debut at Wrestlemania.

Considering her main interactions will likely be with Stephanie McMahon, as well as the ages of Kurt Angle and Triple H (time always catches up, no matter how great they once were) it would be easy to have low expectations for this match. That would make it the second year in a row where a McMahon was expected to have a poor match with a big star at Wrestlemania, after Shane vs AJ Styles opened last year’s main card.

But here’s the thing, Shane vs Styles might have actually have ended up being the best match from Wrestlemania 33. And I’m actually really looking forward to seeing Kurt Angle & Ronda Rousey vs Triple H & Stephanie McMahon.

For one, Ronda is a legitimate athlete. While not a necessity for crossing into WWE, it definitely helps when they have that athleticism from the outset. If nothing else, it gives them credibility.

For two, the match is probably being rehearsed within an inch of it’s life. If not the full thing, then definitely anything involving Stephanie and Ronda. Anything can happen on live TV in front of that kind of rabid crowd, but they are going to be as prepared as humanly possible to go out and tear the house down.

Plus, it helps that it’s still a novelty to see Kurt Angle wrestle in WWE again. The circumstances surrounding his return at TLC last year were not ideal for story building purposes, but it was totally surreal. I think they rushed into his next outing at Survivor Series, but it helped us get to here. This will only be his third match since returning last year, and so his third match in the company in 12 years.

While you can never totally rule it out because it is after all Triple H and Stephanie McMahon, I don’t anticipate any other ending on Sunday than Angle and Rousey standing tall. And Rousey should get the decision. It should be Rousey making Stephanie tap out, it could be Rousey making Triple H tap out. Hell, it could even be Rousey and Angle simultaneously making the McMahon-Helmsleys tap out. Either way, Rousey should win.

So where would that leave Kurt Angle? He’s the Raw General Manager, and his boss is Stephanie McMahon. His position can’t be safe if he beats up Stephanie’s husband can it? What I would imagine is a situation similar to last year, where Stephanie gets “hurt” at Mania, and Kurt gets free reign for a little while as Stephanie recovers.

Then, later in the year, Stephanie and Triple H return to make life a living hell for Angle, leading to the one-on-one match between Angle and HHH that was speculated when Angle was first announced as coming back. Maybe at SummerSlam, with Kurt’s job on the line? That sounds appropriately blockbuster to me.

Let me even throw one more scenario out there looking past that – and yes, I realise this is getting to the fantasy booking stage now. If we get Angle vs HHH at SummerSlam, with Angle’s GM role on the line, have Jason Jordan turn on Angle there, costing him the match. Jordan was clearly building to an outright heel turn before he got hurt, and while he isn’t missed on this Sunday’s show, it could give Angle a long running story to sink his teeth into at next year’s Wrestlemania.

For Rousey, I don’t really know what’s next. The obvious solution would be to make her the 2018 female version of 1998 Stone Cold Steve Austin, but if Stephanie takes time off then there’s not an authority figure for her to rally against. So does she stick around and interact with the rest of the women’s division starting the night after Wrestlemania?

It almost feels too soon. She is a special attraction, so it’s almost as though she shouldn’t be on Raw every week. But how do you write her out without making her look weak, or uncommitted to the company? It’s a tricky situation to manage, and it’s one WWE will have to face up to extremely quickly.

So while Rousey could be a huge asset to WWE; financially, publicity wise, and even for storylines; she is a conundrum for WWE creative. It’s one they have experience dealing with, as they’ve had Brock Lesnar in the same situation for six years. But if WWE fans see the same thing too often, they notice, and they turn. So keeping Rousey fresh, while not having her disappear, but keeping her as a special attraction is going to be one hell of a fine line to balance.

At the minute, all possibilities for Rousey is open. The sky really is her limit. Sunday should be the start of that. Now she has to prove that she can live up to the hype.