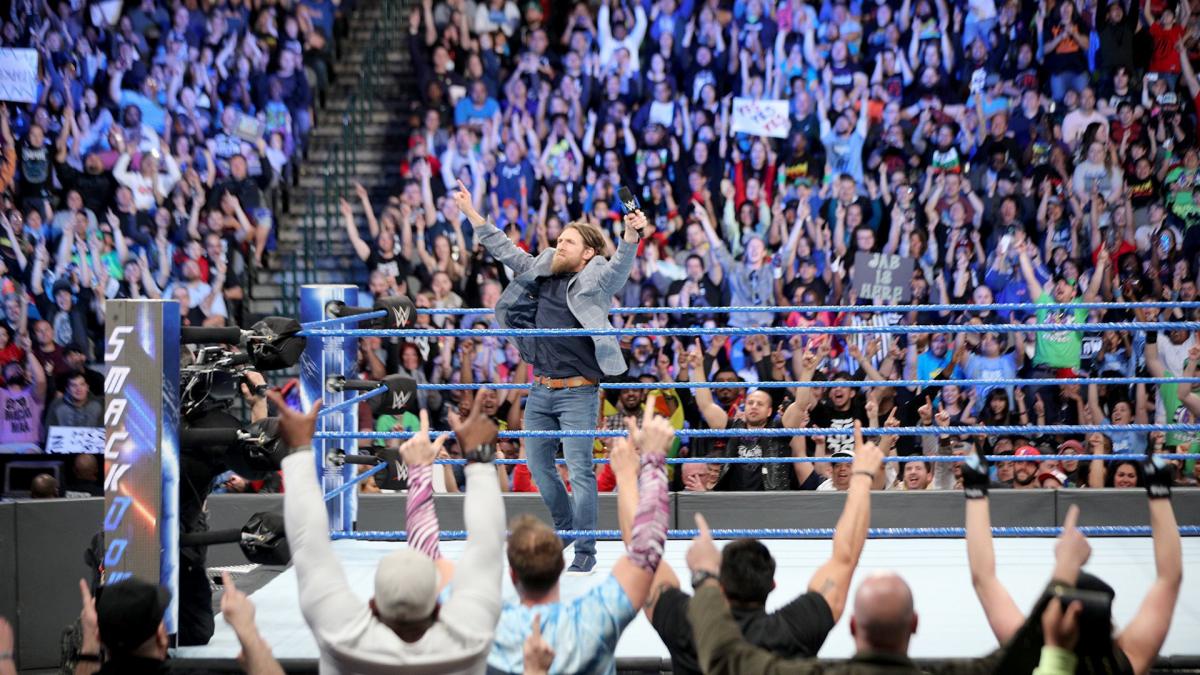 What a week! There’s been so much going on in WWE, it’s easy to forget we’re only 17 days away from Wrestlemania! Let’s just get right into this bumper edition of WWE’s TV Talking Points.

Putting the Big Dog down

This week we finally got a confrontation between the reigning, defending, undisputed, Universal Champion Brock Lesnar faced off with his number one contender Roman Reigns. The story is that Lesnar turned up when he thought Reigns wouldn’t be there – whether that’s because he saw it as a low risk night off, or because he fears Reigns is up to you. But of course, Reigns did show, and got absolutely demolished. The worrying thing is that I wasn’t convinced WWE’s effort to get the fans on Reigns’ side was working before. After the news that broke the next day (much more on that later), WWE’s fight has possibly never been more doomed.

Ever since Brock Lesnar returned in 2012, he has looked best in promos when he has been in pre-recorded video segments. So why not try the same tactic with their other high profile former UFC champion? This package did an excellent job of laying out Rousey’s history for those who may not know her. And it reinforced the point that whatever Rousey sets her mind to, she becomes the best in the world at. And now, her mind is 100% set on WWE. That sets her up as a threat for way past Wrestlemania to the casual fan.

The Deletion of Wyatt

The Ultimate Deletion was… weird. It was wacky, it was eccentric. It was everything Woken Matt should have made it. There were some great moments, and it was fantastic to finally see the rest of House Hardy, and of course Jeff. Or as we may now be calling him, Brother Nero. The ending was intriguing, because it suggests Bray Wyatt is set for a character reboot. What that will be, who knows? But he needed some sort of change, and it looks like WWE have finally pulled the trigger.

Here we go. The big news of the week by a wide margin. Daniel Bryan is back! After a little over two years in enforced retirement, WWE cleared the American Dragon to return to in ring action. Bryan then opened SmackDown to address the news, and he proved once again that he has an unrivaled connection with the WWE Universe. When it comes to cutting these genuine, heartfelt promos, Bryan may be the best WWE have right now. It’s tough not to be overwhelmed with happiness at Bryan’s return.

The main event segment saw Daniel Bryan address Kevin Owens and Sami Zayn’s actions from last week, when they brutally attacked Shane McMahon. Bryan sympathised with them, talking about having known them for years. But, really having no option, Bryan fired them. As you may expect, Owens and Zayn did not take that well, and attacked Bryan. They may have ended with the upper hand, but the crowd were on fire when Bryan attempted to mount a comeback. He is still the most popular superstar in the company. And this attack only serves to increase the sympathy for him. It’s worth noting that although KO and Zayn always have their share of fans despite being heels, the crowd turned entirely against them here. It looks like we’re going to get Shane & Bryan vs Owens & Zayn at Wrestlemania.

I love it when I’m right. I should say, I usually try and avoid spoilers for NXT, and for the last couple of tapings I’ve mostly managed to avoid them. So when it comes to Roderick Strong and Pete Dunne teaming up in the Dusty Rhodes Classic, I’m gonna go ahead and say I called it. I think we might just have new favourites to win the tournament and go on to challenge The Undisputed Era for the NXT Tag Team Championships at TakeOver: New Orleans.

On a week where Daniel Bryan returned to physicality, the closest thing NXT has to the perennial underdog returned to Full Sail. For weeks now, Tommaso Ciampa has been coming to the ring, unable to say whatever it is he wanted to say because the crowd booed him so loudly. This week, he finally snapped at the Johnny Wrestling and We Want Johnny chants. Ciampa went round ringside, ripping up Johnny Gargano signs. Until he got to one masked fan, who revealed himself to be Gargano himself. The crowd went absolutely nuts. Even amongst all the great things we have to look forward to over Wrestlemania weekend, Gargano vs Ciampa when (not if) it’s announced might just top the lot.

The King is coming

That’s right, I’m tripling up on NXT moments this week. It really was an excellent show, and I’m closing this out with a look to the future. He appeared at TakeOver: Philadelphia in the crowd, but this week we saw the first vignette for Ricochet. This guy is an unbelievable flyer, one of my favourite wrestlers in the world. He ups the level of talent on an already stacked roster. Ricochet is a game changer.

If every week was like this one, WWE would be such a hot product. Normally that Rousey video or the Ultimate Deletion would be the undisputed highlight of the week. This time, they weren’t even top five. When this much awesomeness is happening, you know it’s Wrestlemania season.