An Alpha Heel Turn? It’ll Be A Breeze! 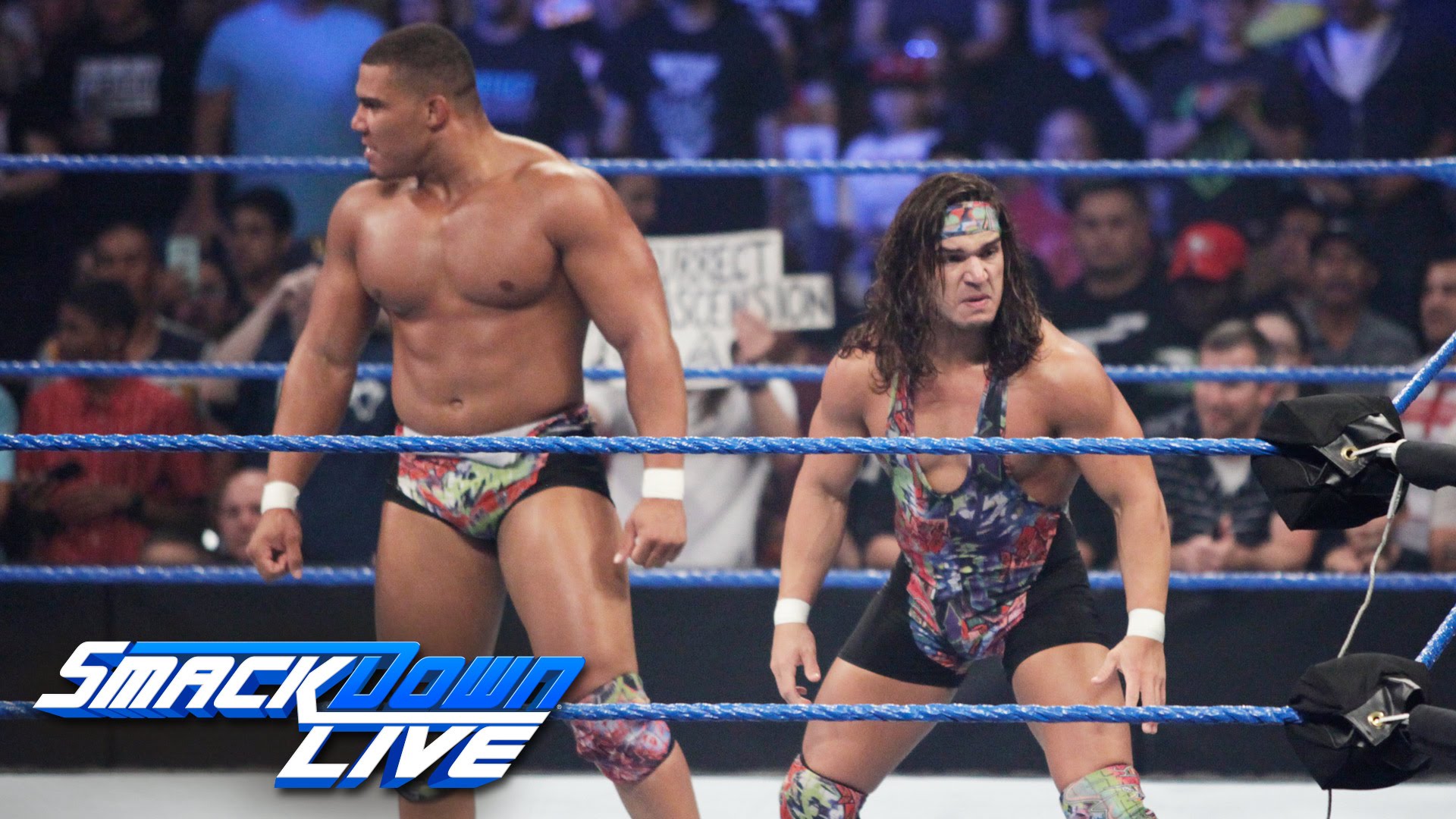 We’re just about a year on from the 2016 WWE Brand Extension, and I have had fairly consistent gripes with one division pretty much ever since. And that division is the SmackDown Live tag team division.

From day one (ish) depth has been an issue. In the tournament to crown the first ever SmackDown Tag Champs there only seemed like two credible winners – American Alpha and The Usos, and with the momentum Alpha still had having just arrived on the main roster it seemed like a challenge for anyone else to beat them. Then the Heath Slater arc happened, and that was fine in the short term. But there was still a dearth of anything other than jobber teams – The Ascension, The Hype Bros and Breezango would need to be built up a long way to be credible.

So with that competition, playing second fiddle so early on in their run was damaging for American Alpha. The duo were called the best tag team in the world by Daniel Bryan upon their selection on draft night, and for a long time they were my favourite team in WWE, but for a while it was as though WWE were seeing how blunt the arrow could get before they let Gable and Jordan loose.

I have said before that Alpha are a unique team in WWE, because they can get over based purely on their in-ring work. They don’t need much promo time (though it would certainly help), because they are so damn good when they step inside the squared circle that people buy into their wrestling. Their backgrounds help with that too – each man’s amateur background has been well documented by WWE, especially Gable’s Olympic exploits – so it seems more legit when they out-wrestle their opponents, and it becomes easier for the audience to buy into their matches.

I had a moment of hope when Alpha beat Randy Orton and Bray Wyatt to win the SmackDown Tag Team Championships, not just because it happened but because of the manner in which it happened. It was so clean, it was a sign that although the Wyatt Family had the bigger names, Alpha were the better team, and I thought that could be a launchpad for the two to shine on the blue brand.

Unfortunately, the Wyatts almost immediately disintegrated, and the aforementioned lack of viable challengers set Alpha back once again. Even beating every other team on the brand in one night couldn’t help them, because it just left them as dominant champions without any contenders, and without a title story interest sunk even lower.

That couldn’t have been spelled out more clearly than at Wrestlemania. While every other title was defended, all of SmackDown’s teams were in the Andre The Giant Memorial Battle Royal. And it’s not like the intra-brand team warfare was the story of the match, Jordan and Gable were just like any other two guys in the match.

So it was probably the right call to reboot things somewhat by moving the titles onto the entertaining heel Uso twins. And to prevent seeing the same match over and over for months on end, Alpha needed to drop out of the title picture. That meant someone else needed to be built up.

And as a result, the comedy tandem of Breezango finally got a chance to entertain the crowd, instead of being placeholders wherever they were needed to lose. I have been championing the potential of Breeze in particular for a while now, and though I had misgivings over how far the fashion police gimmick could go, and though I still wasn’t convinced when the Fashion Files segments started airing, they are getting a reaction now, and actually have a bit of momentum.

That’s why Money In The Bank was a huge missed opportunity.

When Breezango received the VHS tape, and were greeted by mysterious figures with disguised voices taking responsibility for attacking Breeze on SmackDown, I got excited. When the figures challenged them to a match later on, that built even more. If felt like something big might happen. So I cannot for the life of me understand what was gained by revealing that team to be The Ascension and not American Alpha in a heel turn.

Hear me out here. The New Day came to SmackDown in the Superstar Shake-Up, usurping Alpha as the top face team on Tuesday nights. Breezango are on the rise, and I would say are clearly the number two face team right now. With Zack Ryder’s return from injury, the Hype-Bros are back as a third face team too. Numbers are no longer an issue for keeping Alpha on the face side – SmackDown has struggled to find time for all its teams anyway so having three on each side is more than enough.

And most crucially from a character perspective – it would make sense. These are two legitimate athletes, “shoot” wrestlers if you like, and their spot has been taken by two clowns. The fans are passing over them and cheering for two guys who are making a mockery of their sport. Breezango are more interested in playing dress-up than wrestling. Chad Gable was a goddamn Olympian. They should be pissed off. They should be offended. They should want to prove that Breezango are not in their league. They should be at a stage where they just snap and attack the pretenders.

I was really hesitant to turn Alpha heel for a long time. But there’s an obvious story that works here, there’s nobody left for them to face on the heel side, and the crowd have long since stopped caring about them. At a house show I attended in Glasgow last month, The Usos got more cheers and played up to the crowd more – and they were/are the top heels. So go all in, and I don’t just mean turning Alpha heel.

There were rumours just under a year ago that WWE were looking at forming a varsity club style stable, full of prolific former amateur wrestlers. Turning Alpha heel would mean you could potentially align them with Dolph Ziggler, another wrestler whose amateur exploits have been well documented. And once again WWE are reported to be in talks with another potential addition to the group – Shelton Benjamin. This sort of faction would revitalise American Alpha, give Ziggler something to do and make him a credible threat by numbers again, and be a logical way of re-introducing Benjamin to the mix without having him wrestle every week in the latter stages of his career.

American Alpha are far too good to be sitting on the sidelines. They could have great matches against The New Day, and a heel turn could be key to freshening up several storylines on Tuesday nights. And it could all be spurred on because of the development of Breezango. Who’d have thought that six months ago?