Breaking Down the Rumble

I wasn’t writing for this blog in January but if I was, the main talking point would obviously have been this year’s Royal Rumble. For the first time since 1992, the WWE Championship was on the line in the Royal Rumble match itself, and it was the first time ever a champion had to defend his title in the match. While that stipulation itself didn’t overly excite me (I was adamant in the build-up it was a way to put Reigns over even more), I have to say it was booked to near perfection.

The big excitement heading into the 24th January was whether or not AJ Styles would debut in the match. It had been rumoured for weeks that Styles, Karl Anderson, Luke Gallows and Shinsuke Nakamura had all left New Japan to head to WWE, but none of their signatures had been confirmed, and nobody knew exactly when they would appear.

I knew heading in that if unfamiliar music hit, it would probably be AJ. And we didn’t have to wait long. At number three, the Phenomenal One arrived. Entering so early gave him a spotlight, and immediately he went toe to toe with the defending WWE Champion Roman Reigns. He lasted for half an hour in a great showing that gave people a hint of what he could do, but being the 11th man eliminated the fans never really believed he would go all the way and win the belt. It was the perfect spot for him to debut, without being overshadowed by what was to come.

WWE knew they had an issue with Reigns going in. He was champion, but he wasn’t over, and having him enter as the first competitor meant there was a strong chance he was going to be booed for an hour. So how did they get round that? They had Vince McMahon direct the League of Nations to take him out. 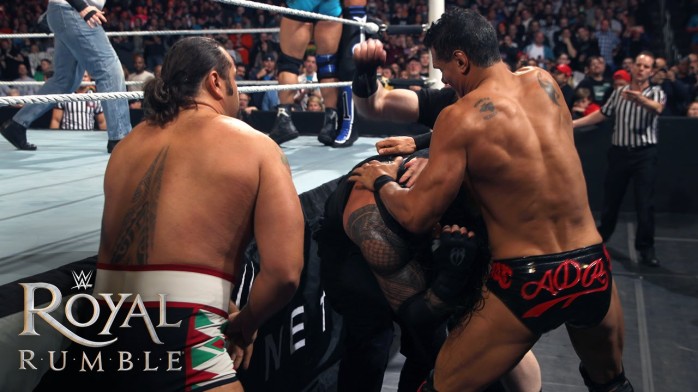 Rusev had already been eliminated from the match, but he returned with Sheamus and Alberto Del Rio to pull Reigns under the bottom rope, attack him and put him through an announce table. The logical thing to do then is put him back in the ring for someone to throw his limp carcass over the top rope, in what was the only logical inconsistency from the match. But the attack did succeed in getting Reigns stretchered to the back, thus removing him from the wrath of the crowd for an extended period of time.

Just before the halfway mark, there was a big moment to pop the crowd in Reigns’ absence. Smart crowd favourite Kevin Owens, who earlier in the night had lost a brutal Last Man Standing Match against Dean Ambrose for the Intercontinental Championship, limped out to the ring and proceeded to eliminate AJ Styles. Cue big heat. It was apparently done to setup a Wrestlemania feud between the two, but that program has so far been saved for future use. Then, a woah moment.

Literally. In the opening bars of Sami Zayn’s entrane music. He made his way to the ring to a massive ovation, and though it didn’t last too long the Zayn-Owens confrontation was deservedly treated like a big deal. Again an elimination sparked the beginning of a future – or maybe continuing – feud, but this time it was Owens who had gone over the top.

The Rumble is always a place where factions can thrive. A spell of dominance can do wonders for a group, and builds great anticipation for their eventual comeuppance. This year, that focus fell to the Wyatt Family. Between them Luke Harper, Erick Rowan and Braun Strowman had 11 eliminations to their names. Those three looked to be building a successful platform for Bray to capitalise late in the match, then Brock Lesnar happened. 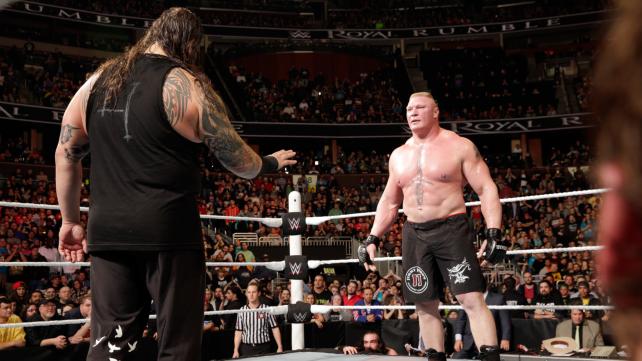 He managed to eliminate all three men, but Strowman did still look strong in the process. Then when Bray made his entrance, Brock was eliminated by the entire family. Lesnar looked strong in a ten minute spell where he eliminated four men, and it took the entire family to get him out, but needing multiple men to put him over the top saved his credibility if that was needed. All parties came out of the Rumble looking strong, which is the mark of a well booked segment.

Of course Reigns returned, and made it to the final three alongside Triple H and Dean Ambrose. This is where, for me, the booking became genius. WWE knew the crowd would be so against Roman that they would cheer whoever could eliminate him. But Triple H was supposed to be a heel. Not just a heel, the heel. The top heel in the company that had years of build behind him. The reaction he got when his music hit really shouldn’t have happened.

So what was WWE’s solution? Don’t have Roman in the final two. I didn’t expect it, and I’m not sure based on the crowd reaction that anybody in attendance expected Roman to go out before the final showdown. The crowd loved it of course, and when they were left with the choice of HHH and Dean Ambrose in Reigns’ place, it was a no brainer. 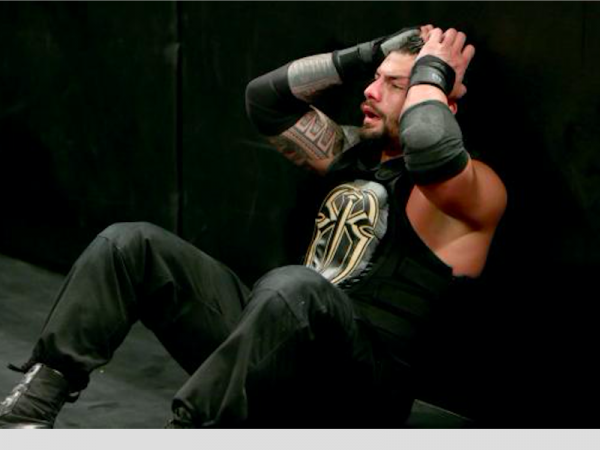 It was very well done. There were moments I really believed Ambrose was going to win. There was big support for Ambrose, and even though when Triple H’s hand was raised in the end it wasn’t a chorus of boos, it wasn’t as positive as it undoubtedly would have been if Reigns had just been eliminated immediately before. Giving Ambrose a chance gave the fans a real hero to root for, not just somebody to prefer as the best of a bad situation, and it worked.

The Rumble can be guilty of resorting to antics to try and fill time (see Mr Socko vs the Cobra). We got almost none of that in 2016. The only moment of comedic relief we got was R-Truth thinking he was in the Money In The Bank Ladder Match, climbing a ladder to find no briefcase hanging above the ring. I found it very entertaining, and it was something to break up the match.

It can also be guilty of lacklustre returns. While there have been massive reactions for the likes of Bubba Ray Dudley (2015), Rob Van Dam (2008), Booker T and Diesel (both 2011), there have also been massively underwhelming and disappointing surprised. Yes Boogeyman, I’m looking at you. This year we had AJ’s debut, Zayn’s appearance, and Triple H returning to the ring (though that was very much anticipated going in). That was it. There was nothing blatant you could point to and think “that wasn’t good”. They all went over very well.

There were clear segments in this years Royal Rumble match, and several people got moments or periods to shine. It was very cleverly done in so many ways, and the ordering of them all made them all feel like big deals (when Lesnar made his entrance, you felt like you were at the business end of the match). There were no disappointments. It was a very good Rumble, the best in years. And importantly, it set things up very well for the next few months, even though plans changed. It did exactly what you would want from it without individual failures, and that is all we can ask as viewers.