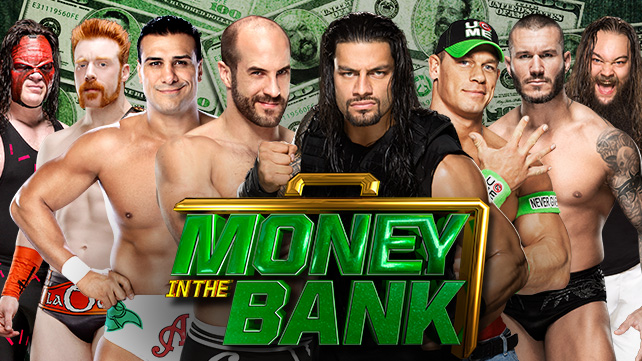 And part two is here! This is of course the second of two columns looking forward to the Money In The Bank Ladder matches this Sunday! The first looked at the contract match, and it can be found here. This column is looking forward to the first ever WWE World Heavyweight Championship Money In The Bank ladder match, where the title is actually on the line! There are 8 competitors in this match compared to 7 in the other, so let’s sink out teeth right into it!

It makes sense that the first name I deal with was the first person to qualify for this match – way back when we didn’t know if it would be for the title or a contract. And that is indicative of his current standing in the WWE. He isn’t quite at the main event, but he has enough credibility that he is a bit more than just another mid-carder. On the way up, that’s an exciting place to be, as it would mean you are probably the next in line for a shot at the main event. On the other hand, for someone like Del Rio, who’s on the way down from championship glory, it’s a dangerous purgatory. Being in that no-man’s land has probably partially contributed to the complete silence you don’t hear every time he enters the ring. There is nothing exciting about him anymore, but he is still a good worker, which is why he’s here.

Paul Heyman said it was not a prediction – it was a spoiler: Cesaro would walk out of Money In The Bank as WWE World Heavyweight Champion. Interesting thing is, that was exactly the same choice of words used when Heyman said Lesnar would end the streak – and look what happened there. Cesaro is a fantastic athlete, with incredible strength, as well as having arguably the greatest manager ever by his side. He deserves to be champion at some point, and it looks like he will be. Will his time come this Sunday? I don’t know. It would feel a bit rushed if not random. But at the same time, with a likely WWE Title match against Brock Lesnar being on the horizon at Summerslam for the winner of this match, it would be such a natural fit for Cesaro because of Heyman’s involvement. Will Cesaro win the belt at Money In The Bank? I don’t know. Can he? Absolutely.

The United States Champion. And yes, that is a major mark against him. He is a former world champion, who is a favourite of management, so that means he could always theoretically win these kinds of matches. But this one isn’t for him. He needs a proper feud for the US belt. I mean, what has he actually done as champion. He had a brief feud with Cesaro that seems to have come to nothing. He will be a presence in this match, probably giving us a few spots for the highlight reel, and he will probably come close to winning. But I just can’t see him actually getting the belts.

This is a very interesting one. It’s nice to hear someone talk about wanting to have the WWE Championship, and actually giving a reason behind it. And it’s all the better from a storyline perspective when it’s as twisted and crazed as Bray Wyatt. I would love for him to win this thing. He has been a breath of fresh air into the top of the card, and has been very impressive both in and out of the ring. The only thing I can conceivably compare Wyatt winning the WWE Championship to right now is the Undertaker in his all-out supernatural Deadman gimmick in the 90s. But this is all hypothetical. While I would love to see him win on Sunday, and there is always a chance, I just think he is behind too many people in the pecking order here. It’s nice to think about the possibilities of Bray as champion, but for now I think we’ll have to put all that excitement to one side.

The “face of the WWE”. One of only two men who didn’t have to qualify for this match, and storyline wise Triple H’s obvious pick to win. He is definitely in with a chance. He won a briefcase last year, and ended up cashing in on Daniel Bryan at Summerslam. Orton is actually a difficult one to place in this match, but I definitely wouldn’t be surprised if he walked out as champion. The downside to that is that his run as champion, essentially since he cashed in last year, through to Wrestlemania 30 was pretty boring. I wonder how much WWE will attribute that to Orton though. They could quite easily pawn it off on several other things. As I said, it wouldn’t surprise me if Orton was champion by Raw on Monday.

The other man who didn’t have to qualify to enter the match. Since WWE seems to reward people for injuring champions with championship opportunities, his inclusion here makes sense. He is too big of a name on the roster to leave off the card, but since Bryan was put on the shelf he has just been floating around doing nothing. Word is that he will resume his feud with Bryan upon Daniel’s return, so having Kane win could be a way to immediately re-introduce Bryan to the title picture. But I can’t see that happening. For me, Kane’s days as a world champion are over. And to be honest, his days as an active member of the roster are starting to wind down too.

Probably the most popular man in this match. Reigns is a guaranteed star of the future, with many expecting him to win the Royal Rumble and move on to championship glory at Wrestlemania 31. He will have a very strong showing too. He will probably have the match won a couple of times. But he will somehow be stopped by Triple H. Whether that’s Trips himself coming down to the ring or people interfering on his behalf, he will find a way to stop Reigns winning. There’s not really much more to say about Reigns, because I covered a fair bit about the Shield when talking about Rollins and Ambrose in the other match, and while I think he has a fantastic future ahead of him, his role here is fairly predictable.

*Sigh*. I’ve started two descriptions with that. Kofi Kingston and John Cena. Both have had the same character for what feels like forever, and both as a result have seen their popularity fall far below their peak. But the reason I’m exasperated this time is because the most likely outcome for this is Cena winning. And I’m not alone in not wanting to see another Cena championship run. It looks like he will definitely take Ric Flair’s record for his own at some point. It’s not even like this is the only option. There are other, more exciting scenarios for this match. But is just feels like it’s gonna be Cena’s match.

Chances of Winning: The Favourite

So that’s it! My (already now dubious) picks for the two ladder matches are Bad News Barrett and John Cena. One for me being the perfect scenario, the other being nowhere near the ideal. That’s WWE for you though, you have to take the good with the bad.

Who are your picks for the ladder matches? And even, who do you want to win the matches? Do you have high hopes for the PPV? Get in touch to tell us by either commenting below, or emailing us directly, or by leaving a comment/posting on out Facebook page (links below).